How to Earn a Featured Snippet with medium.com 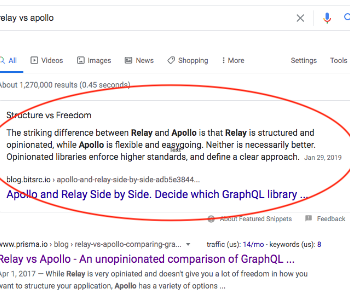 As I was working on some featured snippet optimizations for a client today, I came across something peculiar.

The screenshot of the featured snippet below is a little more than meets the eye.

It's, seemingly, not the most relevant thing Google can find for a snippet (this has been a notorious issue with Google lately - featured content has not been hitting the mark with satisfying searchers' intent).

The top 3-4 domains for the keyword "relay vs apollo" are, on paper, much more reputable and have much higher Domain Authorities (DA).

With the likes of github.com, stackshare.io, and reddit.com, as well as prisma.io all being won-out for the featured snippet, something had to be up.

So, what's the catch?

After diving into bitsrc.io's snippet winning page to do some research, I was even more confused.

The snippet content was found way down at the bottom of the blog, just after the section titled "conclusion".

But that's when I saw it!

If you're not familiar with that feature:

This is a medium.com news article, and blog.bitsrc.io is nothing more than a medium.com blog disguised as a custom branded subdomain for bitsrc.io.

Top highlights, and highlighting blog content in general, has been a medium.com feature for about 5 years now.

However, most conventional blogs are still on WordPress or other in-the-box website builders where this highlight feature is not prevalent.

It's no argument, medium.com has been making leaps and bounds in regards to offering an SEO friendly, engaging, content platform.

With how unlikely it would otherwise be to rank for the snippet mentioned above, medium.com's "top highlight" feature must have some sort of SEO signal in regards to ranking for featured snippets.

"It makes sense. Highlights are similar to social signals in that they indicate engagement and are an easy way to tell Google what searchers find relevant"

This is because @type:"NewsArticle" signals to Google that the content posted is factual news or documentation, as opposed to opinionated or conversational content.

The world is still WordPress heavy.

But new, innovative, tools such as medium.com's highlight feature have reshaped what "engaging content" really means.

Medium's highlight feature isn't truly innovative, however, as Amazon's Kindle and other eReaders have utilized this feature for almost a decade.

What other ways are there to engage readers and earn featured snippets?

Core Web Vitals: How to Measure & Improve Your Scores
SEO Trends for 2021: A Complete Guide
Step-by-Step On-Page SEO Checklist for Organic Traffic in 2021
Ready to Take Your Digital Marketing to the Next Level?
Get Started with a Free Consultation.
book it now!