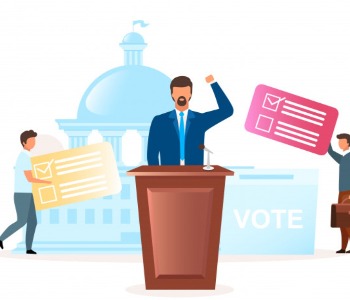 ‍ Due to the pandemic, the playing field has been leveled for candidates in non-presidential races to come in and have a fighting chance as well.  Although these new circumstances did not exist in time for certain candidates to take advantage of it due to the respective primary rules of their states, this much remains true: one needs to have a strong digital marketing presence to take advantage of this unprecedented occasion.

Because of COVID-19, we are also seeing three times the amount spent on digital ads compared to previous elections.  Typically, most digital presidential campaigning was done through TV, which made it difficult (although not impossible) to ignore.  But now, digital marketing affects every single one of us, from social media ads to email marketing, impossible to escape while we’re all stuck at home.

Never before in history has social media and digital marketing techniques been used at such an intense level.  Every facet of American life feels like it’s constantly on the line.

Each candidate and their teams have a unique approach for how they go about campaigning, especially when it comes to digital marketing.  We’ve broken down the tactics that each of them respectively uses when it comes to web design, SEO, paid ads, and more.

First impressions are everything, and one of the best ways to utilize this is through a campaign website. If they have a poorly designed website, no one will want to visit it. No one will buy their merchandise, no one will sign up for their email listserv, no one will donate, no one will look up campaign events and nobody will do the various other miscellaneous things that need doing for a campaign to successfully cross the finish line.

When you first reach Biden’s website, instead of a small popup like the one on Trump’s website, you are greeted with a full-screen popup asking you for a donation.  From what I have seen this is the only popup that he has on his website. It has an important CTA and they make it easy for you to donate.

Once you reach his website, one notices that it has a similar layout to Trump’s website.  This makes pragmatic sense from a marketing standpoint.  Here, Biden is trying to build a sense of community and is keeping it quite simple with single-sentence copy. Biden has the most comprehensive homepage consisting of quotes, videos, CTAs, and a litany other engagement factors.

Jorgensen’s campaign website does not have a popup.  From a marketing standpoint, this would appear to be a significant missed opportunity because pop-ups tend to have a high conversion rate (CVR) and are extremely easy to set up. Other than that there isn’t anything particularly remarkable about her website. The depth of her content isn’t particularly detailed, but considering how new her website is, this is entirely understandable.  On the home page, she has virtually the same CTAs as Biden does, albeit with slightly different formatting.

Trump’s team has done a really good job with web design – no matter the time of day that you go to his website, there is always a popup.  If an important meeting or rally is going on, you will either get the live feed or a way to watch it.  If there isn’t something going on at that given moment, you’ll get a call-to-action (CTA) letting you know of an offer, future rally, sign up, donation opportunity, and so on.

Once you either click out or fill out the popup, you are greeted by more CTAs.  Similar to Biden’s site, the copy on Trump’s website aims to build a sense of community among his supporters while engaging them to attend events and donate through single-sentence copy. There are about five CTAs on this area of the homepage alone.  The goal of these CTAs is to persuade the user to action instead of idle browsing.

Below are the statistics from the two main websites. It should be noted that because Jorgensen’s site was so new at press time, no statistics could be gleaned from there accordingly.

Given that Trump’s pages per visit and average visit duration are higher purely because of the amount of CTAs he has on his website, these higher numbers make sense here. In addition, their bounce rates (the percentage of visitors to a particular website who navigate away from the site after viewing only one page) are on the lower end of things with an average bounce rate being roughly 41-55% under similar circumstances.

SEO is something that the average person sees multiple times per day, even if they don’t actively think about the SEO process.  Regardless of what the general public might think, it is a very important factor, especially for a presidential election. Here’s how all three candidates are respectively doing on this front:

All Candidates’ Organic Traffic (as of April 2019)

Right off the bat, Trump has a major advantage since first launched his original campaign website for his previous run for president in April of 2015, which chalks up to well before Biden or Jorgensen had or possibly even thought about starting a campaign website (let alone before declaring their respective candidacies for the 2020 election). Because of this long-running advantage, Trump was able to consistently get monthly traffic in the millions month after month.

On the other hand, Biden launched his campaign website in May of 2019, but as evidenced by the above chart, his organic traffic is still nowhere near where Trump’s.

‍Both major party candidates have a substantial lead when compared to Jorgensen, who did not launch her campaign website until June of 2020 – only five months before Election Day.  Although she has had a striking peak of traffic—which, unsurprisingly, is expected when one is running for the highest office in the land—that is only the picture when you are looking at her website numbers alone.  If you take a step back and compare it to the giants that are Biden and Trump’s websites, you can barely see the growth on Jorgensen’s side of things.

All Candidates’ Organic Traffic (as of July 2020)

Furthermore, when it comes to domain rating (DR) and backlink juice, both essential to SEO, Trump has double the referring domains when compared to Biden.

On a surprising note, even though Jorgensen’s website is brand spanking new by comparison, both the URL rating (UR) and the DR are both quite impressive. It can sometimes take people years to get to either a decent DR or UR, let alone both.

Because of the sheer number of backlinks and numerical domains, Trump’s website unsurprisingly earns more of the higher page ranks in the first through tenth positions—better known collectively as the first page of the search engine results page (SERP).  This may not seem like much but on average the first page of the SERP gets 94% of clicks.